An Attorney to Fight for You!Affordable RatesContact Us Now
Home
Our Beloved Izze the Puppy

Our Beloved Izze the Puppy 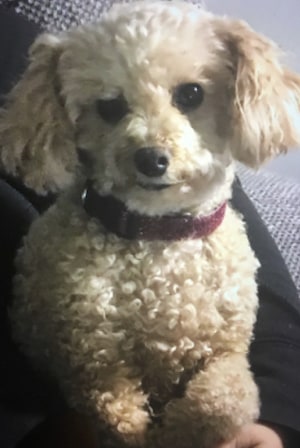 This year (2020) has been very difficult for many people. For me and my family it has been difficult because our wonderful 8-½ year old toy poodle puppy (Izze) suddenly died at the end of January. She was very wonderful and we miss her so very much.

Provided below is a snippet of some of the many things that give you a window into seeing how amazing she was.

I always referred to her as a puppy because, in addition to being tiny (7 pounds; 8 pounds when we fed her too much), she always had a puppy energy, a puppy inquisitiveness looking for new things, and a puppy bounce in her step. Throughout her entire too-short life on a daily basis people would also ask if she was a puppy.

One of her best strengths was her eyes. Frankly, her eyes were similar to that of many dogs, but her eye contact was amazing. When we would go for our walks she would always be looking right into the eyes of the people that we would come upon, seemingly looking right into their being, looking for the good in people - and finding it - or at least looking for someone to pet her.

She would light up a room.

At home she was a lap dog, happily sitting on our laps for hours at a time. That, going for walks, and barking at big dogs (to let them know who was the boss) were three of her daily big joys. While big dogs would frequently back away, or at least not come forward, probably a big reason for that was that they were confused, in that they had never before seen a rabid barking bunny (which is kind of what Izze would look like).

Daily walking adventures. The best part of my day. She was always happy beyond happy to be going for a walk, even very early in the morning and very late at night. Unless I was very tired, or in a rush to go to work, we would leisurely go on our walks, usually varying our routes. Sometimes she would choose the route and sometimes I would choose.

During our walks we would almost always go hunting for (but never catching) bunnies, birds, squirrels, chipmunks and/or geese. She would sometimes get fairly close (but not really) to catching her prey. On the few occasions when the animal we were chasing would not run away (in particular I remember this one bunny that was bigger than Izze) we would generally choose to go elsewhere.

Her Best Skill. When we would come upon a group of people in downtown St. Joseph (say a 6-person group in a circle), she would insert herself into the middle of the circle and then go up to each person individually, giving them an opportunity to pet her. She usually would rub up against them, or stand very close right next to them, and look right up into their eyes (making it abundantly clear what it was that she wanted) - almost always they would take the hint and happily comply. Most people would melt at that point. This was not a trick that I taught her, but rather a skill that she was born with.

On the rare occasion that she would miss one person in the group I would slightly point my finger in that person’s direction and she would happily bounce over to that person.

Would flitter from person to person (happy victim to victim). Zig-zagging down the sidewalk.

Her record of 130 compliments during a 2 hour walk downtown (that day about 2-3 dozen people petted her).

Petsmart - Me and separately Grandpa.

Ride in the car - Took her all over

Even got into a pet-friendly McDonalds in the Loop

She was like a Tasmanian Devil when we would come upon German shepherds, Doberman pinchers and, curiously, some apparently fierce looking golden retrievers. For the first two I would need to pick her up and take her across the street, as she struggled mightily to get at her perceived nemesis.

Bicycle riding in the bike basket - also not particularly safe. She was a trooper. We stopped doing this after a few years. In retrospect I think she might have been scared.

Short memory - The Raccoon in the backyard

Ride in the car - sometimes I would let her drive when we were driving a couple blocks to St. Joseph, Michigan (perhaps not overly safe) - always end up at Fuzzy Butts, where they would have fresh baked treats

Best Part of Their day - Make Their day

Her show of respect to some little dogs - seemingly subservient, but not really - she would end it with a leap like a panther. There seemed to be a pattern to the type of dog that she would end with a leap - I learned to tried to warn people in advance - but sometimes I would incorrectly not think that this was to be a circumstance where she would do her leap - she big-time startled more than a few owners

And then there was Dee-o-jay…

From Shawshank Redemption, “I miss my friend”, but moreso I miss my puppy daughter.

Contact Us
Practice Areas
Unemployment Hearings
Severance Agreement Negotiations
Labor Day
2009
Labor Day
2010
Labor Day
2011
Labor Day
2012
Labor Day
2013
Labor Day
2014
Labor Day
2015
Labor Day
2016
Labor Day
2017
Labor Day
2018
Client Reviews
★★★★★
"I found David Porter's representation of me to be both professional and compassionate. He did a solid job of explaining my legal options and provided me with real world examples of how labor/employment law works. His support and advocacy helped me to get through a very difficult time in my professional life. I would without hesitation highly recommend him to a friend in need of a seasoned practitioner." Jack
★★★★★
"I can't thank you enough for dealing with the bureaucracy of the Indiana and Illinois unemployment offices. Their response to my individual communications seemed to be the default answer of "No". With your help and persistence you were able to cut through the red tape and win my Trade Adjustment Assistance, allowing me to pursue my Master's of Science in Electrical and Computer Engineering. It is a good feeling to know I can call on such a great resource in trying times." Marc
★★★★★
"After finding myself in a terrible position with a former employer to whom my fate was at their mercy, David Porter stepped in and negotiated a settlement plan that not only kept me out of court, but also prevented any negative references or information being leaked out to possibly hinder my future growth as a professional." Mike
View More
Submit a Law Firm Client Review